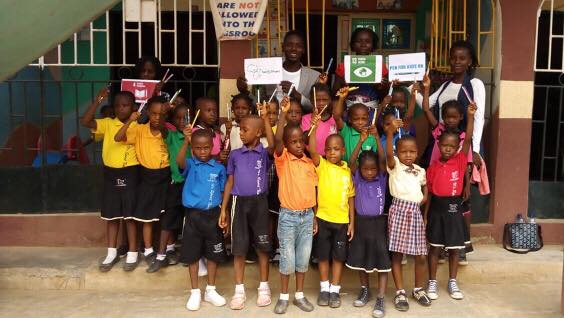 Mr. Solomon Oluwaseun Samson is a young man who lives in southwestern part of Nigeria, Ayetoro-itele, ota Ogun State. He noticed that his community and environment was impacted by the climate crisis. He then decided to join Team 54 Project family to find solutions.

His passion, dedication and commitment as an advocate led him to be named as one Assistant Coordinator for Nigeria in the Team 54 Project. This honor, as he said, motivated and inspired him to work more for his community.

Mr. Solomon fully understood the Team 54 Project’s ALL-INCLUSIVE concept and decided to use it to raise awareness about the climate crisis. He was one of the first members who started the Team 54 Project School-Based projects, by going to schools and talking to students about climate issues and solutions. He didn’t stop there, in partnership with our CEO Dr. Gbujie Daniel Chidubem, they created innovative way to use sports to support the climate movement message of urgency to act. He organized the first Football Climate Advocacy Match, which gathered a lot of people in his community and he used it to raise awareness about climate issues.

His hard work lead him to be named as the Eco-Hero Award (EHA) Winner for the month of April 2019.

Team 54 Project Board, Management Team and members would like to congratulate Mr. Solomon Oluwaseun Samson and to thank him for inspiring all of us to be the team players and to drive climate awareness into climate action.