It’s a bird, it’s a plane…it’s a champion of change! 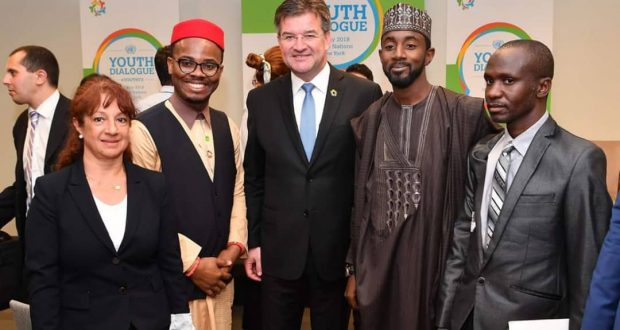 When you think of a superhero, you often imagine a man or woman wearing a cape and fighting the enemy with weapons. Well, there’s currently a “champion of change” who wears traditional Nigerian attire rather than a cape and who uses his words and wisdom as his weapon for change against the enemy known as pollution and environmental devastation. That hero goes by the name of Dr. Daniel Chidubem.

The man behind the mission

Dr. Chidubem hails from the Federal Republic of Nigeria and addresses millions on how to adapt to the growing challenges enthralling the entire world. Selected personally by the World Medical Association to be part of the delegation to the United Nations Framework Convention on Climate Change, Dr. Chidubem slowly became an unlikely hero that inspired millions across the globe to become their best, both for themselves and for the planet.

After a life-changing conversation with former U.S. Vice President Albert Gore about the global warming challenges facing the planet, Dr. Chidubem developed his own concept on how to address the environmental crisis facing our world. Pooling his knowledge, network and determination together, Dr. Chidubem founded the Team 54 Project which is a not-for-profit organization meant to raise awareness on the urgent need to take global action to protect the environment.

In less than two years, Dr. Chidubem and his team gained an international membership of over 50,000 individuals who were dedicated to improving the lives of those inhabiting the planet through education and conversation. The changing climate is a “challenge that no one country or organization can solve by themselves. Therefore we must collaborate and harness the talents and skills from everyone in order to tackle this existential threat,” Dr. Chidubem said when asked about his mission to gain international support.

More than a mission…it’s a way of life

Climate change might have been an issue that sparked an initial interest with Dr. Chidubem, but it only scratches the surface of his dedication to improving the lives of others. He mentions the importance of sustainability and how what humans do on a daily basis contributes to whether or not we have a future that is healthy and vibrant or damaged and limited.

Dr. Chidubem’s professional work began in the field of medicine—however, he left the profession due to an overwhelming feeling that he could make more of an impact on the improvement of human existence by focusing on environmental factors that make humans sick. “There is no better way to ensure preventative illnesses than to deal with the environment that might serve as the contributing factor for such illnesses,” Dr. Chidubem stated. “Fighting to save the planet isn’t enough if you aren’t dealing with sustainability and how we can ensure the planet heals…just as humans are in need of healing.”

Currently, Africa is suffering from beach erosion and drought which is both killing the animals and contributing to poverty. Deforestation and the major loss of habitat for millions of species are also issues facing Dr. Chidubem’s home country.

Dr. Chidubem realized that the issues facing Africa were issues that were harming other countries throughout the world. It was this eye-opening reality that served to empower Dr. Chidubem to fight the good fight and speak to millions on how these changes are impacting the future for ourselves and our children. “Environment has a direct impact on the mental, physical, and even emotional well-being of every human in existence. We as a nation are all impacted by these changes, so we as a nation must rise up to meet the challenges head-on,” Dr. Chidubem said.

Change must be inevitable

Dr. Chidubem believes that change has to start within the heart and mind of each person living on the planet. For this, he travels the world to educate and inspire others on the importance of caring for themselves and the world around them. To learn more about how Dr. Chidubem and how his Team 54 Project organization are impacting the globe, please visit https://www.team54project.org or join the conversation on Facebook at https://www.facebook.com/team54project/ and see for yourself what a real hero looks like.