Mozambique Is Drowning. Nebraska Has Flooded. We Need a Green New Deal. 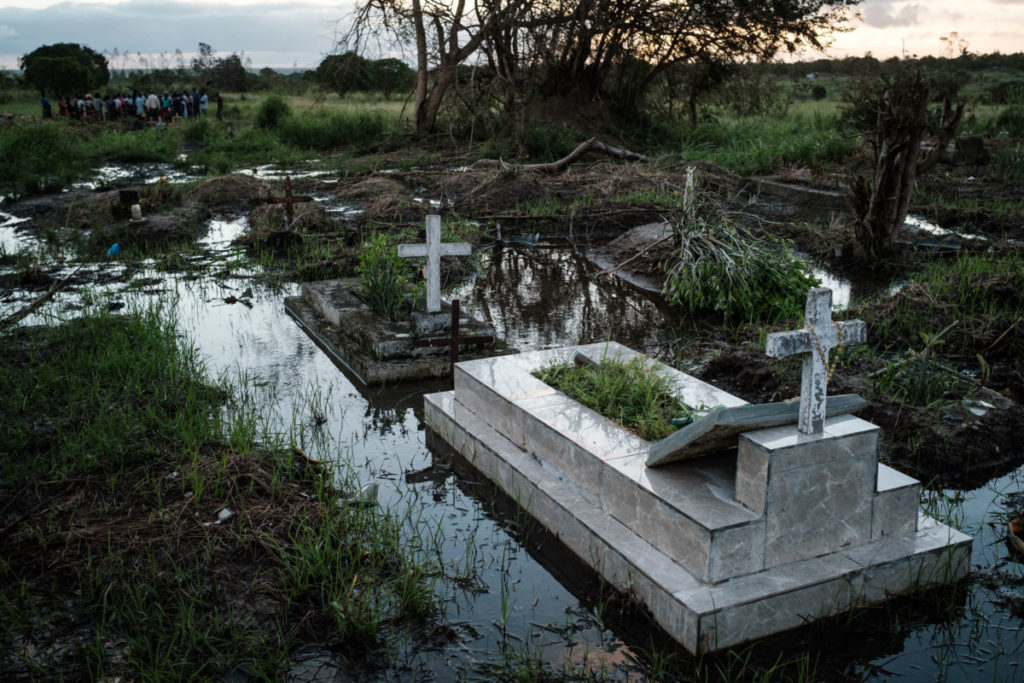 The ocean has come for the coastal African nation of Mozambique. Tropical Cyclone Idai, a devastating storm that pummeled the country with fierce winds, was followed by a massive flood that has obliterated dams, swept away homes and bridges, erased roads, shuttered airports, and damaged 90 percent of the city of Beira, home to more than 500,000 people. There are bodies in the water and no one to collect them, making diseases like cholera an imminent threat.

More than 1,000 are confirmed dead, a number that is sure to rise. Thousands more are homeless and seeking refuge. “Many people were waiting for food, water and medicine,” reports The New York Times, “in makeshift shelters in primary schools and other government buildings.” Satellite imagery over Mozambique shows a new flood-made inland sea that is 30 miles wide in places. “We’ve never had something of this magnitude before in Mozambique,” said non-governmental organization coordinator Emma Beatty. To the west in Zimbabwe and Malawi, more than 100 people are known dead, hundreds more are missing and the damage is extensive.

“There are at least three major ways that the Mozambique floods are related to climate change,” reports Eric Holthaus for Grist. “First, a warmer atmosphere holds more water vapor, which makes rainfall more intense. Idai produced more than two feet of rainfall in parts of the region — nearly a year’s worth in just a few days. Second, the region had been suffering from a severe drought in recent years in line with climate projections of overall drying in the region, hardening the soil and enhancing runoff. Third, sea levels are about a foot higher than a century ago, which worsens the effect of coastal flooding farther inland.”

For years, stories of massive climate disasters such as these may have felt distant to many U.S. readers, but the climate crisis has arrived here, too.

A massive climate change-driven flood has transformed the middle of the United States into a bowl of soup. The waters have rolled down the Mississippi and Missouri Rivers and inundated huge swaths of Kansas, Nebraska, Missouri, Minnesota, Wisconsin and Iowa. Multiple towns in every state have been severely damaged, and thousands of farms that were already struggling have been scourged. On average, it takes about 28 days for river-borne floodwaters to recede, but repairing the wreckage left behind is expected to take years. Tens of thousands of people have been affected, and many are now without homes.

“In case you were wondering, the climate crisis isn’t coming. It’s already here,” writes Charles P. Pierce regarding flood preparations at Offutt Air Force Base near Omaha. “The one institution of government that actually believes that is the United States military, and that’s a good thing, too, because, in this case, the exaggerated effect of the crisis and the extreme weather that results from it — the blizzards, the ‘bomb cyclone,’ the huge snowmelt, and the flooding — has become the national security threat that the Pentagon has seen coming.”

But even as the military is taking active steps to prepare for the inevitable consequences of climate disruption, the deniers in Washington, D.C. still won’t get the message. They better, and soon, because the people who lost their homes and livelihoods in Nebraska and Missouri have already joined the rising global ranks of climate refugees, and if the experts are correct, there are millions more to follow.

“‘It’s human nature to think we are masters of our environment, the lords of creation,’ said Mr. Remus, who works for the United States Army Corps of Engineers,” reports The New York Times. “But there are limits, he said. And the storm last week that caused him so much trouble was beyond what his network of dams can control. Mr. Remus controls an extraordinary machine — the dams built decades ago to tame a river system that drains parts of 10 states and two Canadian provinces. But it was designed for a different era, a time before climate change and the extreme weather it can bring.”

The ongoing pushback against the Green New Deal (GND) by most Republicans and some Democrats highlights the degree to which our leaders are willing to wait until the roof caves in on us before they act. Conservatives in Congress and their allies on Fox News are in an undistilled frenzy over the GND – “They’re going to take your car! Your cows! YOUR CHILDREN!” — and Donald Trump has added windmill jokes to the arsenal of nonsense he deploys at his rallies.

Worse, Democrats like Sen. Dick Durbin are actually joking about it as if the matter wasn’t lethally pressing. House Speaker Nancy Pelosi, to the surprise of none, is dragging her feet about bringing the GND to a vote. Union leaders representing workers in energy and construction are also voicing opposition, expressing concern over the employment opportunities they may lose if the GND becomes law and skepticism about “green jobs” to come. “We’ve heard words like ‘just transition’ before, but what does that really mean?” asked Phil Smith, spokesman for coal-mining members of the United Mine Workers of America. “Our members are worried about putting food on the table.”

Hard to put food on the table when all the farms are under water, but I digress.

These concerns comprehensively miss the point on the GND and the climate disruption it seeks to address. The GND is a non-binding resolution, which means it has precisely the same force of law as a non-binding resolution celebrating the fact that children enjoy ice cream cones. The GND exists for one reason: To finally get elected officials talking seriously about what we need to do in order to prepare for what is already here, what is definitely going to come and perhaps to mitigate the damage as best we can.We are out of time. Nebraska can tell you all about it.

“Love the Green New Deal or hate it,” writes Justin Worland for Time, “the conversation it has unleashed represents a shift in the discussion surrounding climate policy in the U.S., with ripples that will spread across the globe. The outcome of the debate will go a long way toward determining if humanity can avoid the most catastrophic consequences of a rapidly warming world.”

According to various polls, more than 70 percent of people in the U.S. believe that climate change is happening right now, and two-thirds of Republicans believe their party is out of step with reality on the issue. Activists like those in the Sunrise Movement are petitioning lawmakers to get it in gear, and are planning a traveling explanation tour through coal states like Kentucky and Pennsylvania to make the case that waiting is no longer an option.

Let us hope their entreaties do not again go ignored. We are out of time. Nebraska can tell you all about it.