Everything you touch is trash and it all ends up here 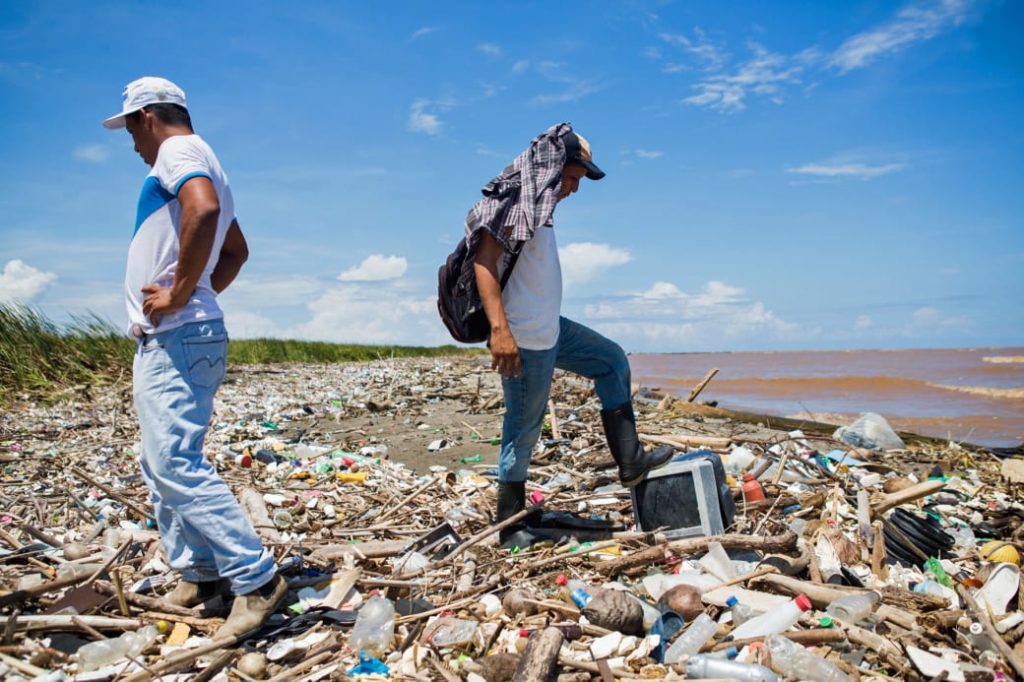 When you start looking for trash, you see it everywhere. It flows past you every day, an endless stream of bags and takeout boxes and disposable forks, the blister packs and laminated foils that come wrapped around every tube of toothpaste or plastic toy or power charger you buy, and then, later, the tubes and toys and cords themselves. It’s even the clothes on your back and the shoes on your feet. Once and future trash is everywhere around us all the time, for a moment, before it disappears into a distant landfill — out of sight, ditto mind.

We wanted to know where all that plastic trash goes. We met on a fellowship focused on water in the American West — both journalists with a background in environmental issues, a writer and a photographer. We were both obsessed with the invisible currents and infrastructure that shape the landscape in ways we may or may not ever see.

In Guatemala, those currents move through the Motagua River. The country’s largest river reaches two-thirds of the way across the Central American isthmus, 300 miles from its source in the remote central highlands of Guatemala to its mouth on the Caribbean’s Mesoamerican Reef, the second-longest stretch of coral in the world. Along the way, it passes Guatemala City, the country’s busy capital, crowded with 3 million people and creased with deep ravines that, in the rainy season, funnel floodwaters loaded with refuse and waste to the river.

For years, the tides of trash have washed up on the beaches of Guatemala and neighboring Honduras, burying the small fishing communities in feet-deep drifts of Styrofoam and other plastic: combs, toothbrushes, mascara tubes, Crocs, flip-flops, colorful snakes of plastic rope, molded foam mats, rubber balls, action figures, soda bottles, syringes, IV bags, half-empty bottles of disinfectant. Just offshore, reefs of plastic bags float on the waves like icebergs jutting above the water and hiding even more beneath.

In the small community of El Quetzalito, locals clear the beaches with rakes and wheelbarrows. In previous decades they might have made a living from fishing or subsistence farming, but now they work for the government’s environment ministry, which has struggled to address the problem of pollution along the Motagua. While the victims of this pollution are local, the problem is ultimately global: An estimated 80% of ocean plastic comes from “mismanaged waste” like what washes out of Guatemala City’s dump every year. As bag bans and straw strikes go into effect in American cities, this major source of pollution is left unaddressed.

We began to understand trash not as something that is irresponsibly disposed of but as something that is irresponsibly created in the first place. Plastic, especially, is ubiquitous and unavoidable, churned out as casually as it is thrown away: a drinking straw scissored in half and served alongside our morning coffees, a cheap pair of shoes worn out too quickly, a plastic bag to hold the fruit we bought at the market. Its source is somewhere far away, invisible, but the tide is ever flowing.

This story was made possible by support from the International Women Media Foundation. To see more work by Celia Talbot Tobin and Amelia Urry, visit their websites.