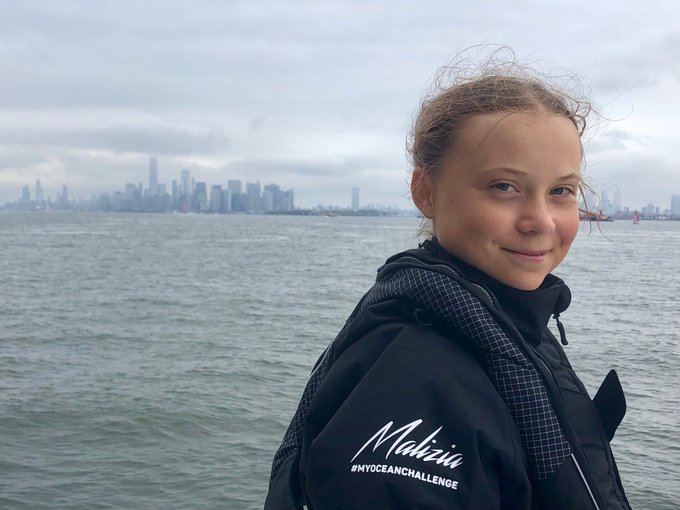 “It’s insane that a 16-year-old has to cross the Atlantic Ocean to make a stand.”

NEW YORK — Greta Thunberg, the 16-year-old Swedish activist who spurred a global climate movement, arrived in New York City on Wednesday to a roaring crowd of hundreds of people.

Thunberg traveled for 13 days and 18 hours across the Atlantic Ocean on a sailboat powered by wind and solar energy to draw attention to the greenhouse gas emissions released by the airline industry. Experts say the single biggest way to minimize your individual carbon footprint is to limit how many flights you take.

Thundering applause and chants greeted Thunberg as she disembarked at the North Marina Cove in lower Manhattan, still woozy from the multi-week journey.

“The ground is still shaking for me,” Thunberg told the audience during a press conference. “I want to thank everyone so much, everyone who is here and everyone who’s involved in this climate fight because this is a fight across borders, across continents.

“It’s insane that a 16-year-old has to cross the Atlantic Ocean to make a stand,” she said.

Thunberg came to New York to participate in a series of events and protests leading up to the United Nations’ General Assembly, with the goal of pressuring world leaders to commit to achieving the Paris climate agreement goal of keeping global temperatures from rising more than 1.5 degrees Celsius above pre-industrial levels.

The world has less than 11 years to achieve this goal, and it will require a complete transformation of the global economy, an end to fossil fuel use and extraction, and massive investments in renewable energy — points that Thunberg regularly makes when addressing audiences.

“The climate and ecological crisis is a global crisis and it’s the biggest crisis humanity has ever faced,” she said at the press conference. “If we don’t manage to work together to cooperate, then we will fail. We need to stand together and support each other and take action, otherwise it might be too late. So let’s not wait any longer. Let’s do it now.”

Thunberg rose to prominence by skipping school on Fridays to protest in front of Sweden’s parliament. The weekly actions grew into a global protest movement called Fridays for Future. Millions of youth activists around the world have rallied around her cause, using her framework to demand immediate solutions to climate change.

The youth activist has since been nominated for a Nobel Peace Prize for her work and has spoken at the World Economic Forum and in front of the European Parliament.

Activists of all ages came out to welcome Thunberg to New York.

Students Katharina and Nicholas Klag said they had attended several Fridays for Future events in Germany and were excited to support Thunberg in New York. Bernice Gordon, whose grandchildren have been inspired by the youth activist, said that Thunberg is “brilliant and prophetic.” Nabil Viñas held a sign that said, “I want to be like Greta Thunberg when I grow up.”

“I was born in the Philippines and I have family who live there who are impacted by increasingly severe typhoons,” Adrien Salazar, a climate campaigner at the nonprofit Demos, told Global Citizen. “I grew up in California and I have family there who are affected by the wildfires. This is an issue that’s dramatially affecting people’s lives today.

“I think Greta has been able to speak truth to power in a way that has resonated with a lot of young people who are frustrated, who have lived their whole lives seeing inaction on climate change,” he added.

Thunberg is known for the bluntness of her words and by practicing what she preaches. She harshly criticizes world leaders for their inaction during global forums, and then valiantly sets an example of individual initiative by reducing her personal climate footprint.

That said, she understands that traveling across the Atlantic by sailboat isn’t feasible or desirable for other people. The point of the trip was to urge people to consider the impacts of their travel choices on the environment.

“Of course this is not something that I want everyone to do, but the trip was very surprisingly good,” she said. “I did not feel seasick once.”